If you’ve ever read the children’s book Rootabaga Stories by Carl Sandburg, you might say the whole book might have been better off if the above mentioned bibbed pigs would have just ate it cover and all, and the stories could have finished right there. We had a copy when my daughter was growing up, and it wasn’t one of my favorites. But just recently I read that Sandburg’s intention in writing the book was to deliver a vein of the nonsensical anarchy that childhood sometimes represents to literature, and if that’s the case, then no better vegetable could be picked to embody the title of the book than that of the strange, anarchic, nonsensical looking rutabaga.

Rutabaga with a face only a mustard could love …They’re roots (not tubers). And in their gigantic bulbousness, they remind me a little bit of the equally large jicama (which is also a root).

One regional pride thing,for us in Michigan, is that in the UP of Michigan we have a traditional food called the pasty where rutabagas are the central ingredient. Laura and I went to school up in the UP, and the people have a uniqueness to them that is all rutabaga. Just to show you how meaningful pasties and by extension the rutabaga is to the culture of the UP here’s a clip from Escanaba in Da Moonlight.

And of course, we can’t neglect the Rutabaga Chorus from Ithaca New York that gathers each year to ring in the annual International Ithaca Farmer’s Market Rutabaga Curling Championship.

Root of Roots, Sport of Sports–there is something about this root that inspires the crazy nonsensical antics of childhood. That’s what I keep telling my son anyway, who hasn’t taken to the taste.

Rutabagas are in the mustard family. They’re a root that looks like a turnip and are very closely related to the turnip but they are much larger than a turnip. They’re like scary turnip giants (see the jack o lantern for reference). Two varieties of rutabagas exist, white fleshed and yellow fleshed. Most are familiar with the yellow fleshed rutabaga, because that is the sole commercial variety. Of the yellow fleshed varieties, American Purple Top is the most common.

Because the Rutabaga is in the mustard family, like all other mustards, it will have these shared characteristics: Mustard flowers are yellow or white (rutabaga has yellow flowers). They have four petals that form what looks like an “x” or an “h” (rutabaga flowers are “x”-like). The flower also has five stamen, the male part of the flower that surrounds the center pistil or female part. Two of these stamen are long and the other three are short.

The Rutabaga itself has a root bulb that is more globular than turnips. Their leaves look like cabbage leaves and have a bluish color to them.

Rutabagas are usually grown to harvest in the fall (at least in our region of northern Michigan). They grow best in cooler climates. Typically Rutabagas like a loam soil but they can grow in pretty much any soil as long as they are given the proper nutrients. Usually we just scatter the seed, but you can also make a row of them. Try to get some soil on those ‘baga seeds too–about 1/4″ will do. Typically seeds are sown in may or June and like we mentioned with the daikon (and like several other root crops), the rutabaga tastes sweeter if harvested after the first frost. 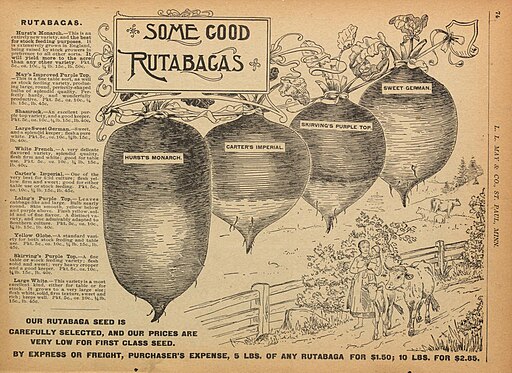 The name rutabaga is an old Nordic term meaning “baggy root”[footnote]https://books.google.com/books?id=kCjn3EDM0FgC&pg=PA295&dq=rutabaga&hl=en&sa=X&ved=0ahUKEwj0-pOFjPTYAhUK44MKHcmsB_QQ6AEIOTAD#v=onepage&q=rutabaga&f=false [/footnote], which makes sense given rutabaga sounds a lot like “root bag.”

Before the 17th century people referred to rutabagas and turnips in similar terms, so its hard to understand to what extent people used the rutabaga before that in their daily lives. The first botanical source to reference the rutabaga as a distinct plant from the turnip mentioned the plant in 1620. But some evidence suggests that Swedish grew the rutabaga as early as the 1400’s and then pushed it out to the rest of europe. For this reason, rutabaga is sometimes referred to in England as the swedish turnip or just as Swedes [footnote]https://books.google.com/books?id=xZXuBwAAQBAJ&pg=PA1692&dq=rutabaga&hl=en&sa=X&ved=0ahUKEwjD0tWnjfTYAhUkyoMKHYEvAVk4ChDoAQhaMAk#v=onepage&q=rutabaga&f=false [/footnote] . Others say that the root was first grown in Bohemia or even Asia [footnote] https://books.google.com/books?id=tka838efZvkC&pg=PA285&dq=rutabaga&hl=en&sa=X&ved=0ahUKEwjD0tWnjfTYAhUkyoMKHYEvAVk4ChDoAQgtMAE#v=onepage&q=rutabaga&f=false [/footnote] .

Just as confusion exists as to what is referred to in early literature–turnips or rutabaga–so also some confusion exists in to how the plant actually originated. Some sources say that no wild varieties of the plant exist [footnote]https://books.google.com/books?id=tka838efZvkC&pg=PA285&dq=rutabaga&hl=en&sa=X&ved=0ahUKEwjD0tWnjfTYAhUkyoMKHYEvAVk4ChDoAQgtMAE#v=onepage&q=rutabaga&f=false [/footnote], others point to charlock as the wild rutabaga [footnote]https://books.google.com/books?id=xZXuBwAAQBAJ&pg=PA1692&dq=rutabaga&hl=en&sa=X&ved=0ahUKEwjD0tWnjfTYAhUkyoMKHYEvAVk4ChDoAQhaMAk#v=onepage&q=rutabaga&f=false [/footnote]. According to the online enyclopedia Brittanica, Charlock is a mustard native to the Meditarranean that is a close relative of white mustard. The white mustard plant is used to make the condiment mustard.

Again sources are confused, if no wild relative exists, as to what exactly produced the rutabaga. Because mustards can cross with one another pretty readily, some say rutabagas came from an accidental cross in medieval gardens between a cabbage and a turnip. Others say that it was a kale and a turnip that crossed.

You can eat the vegetable raw or cooked. It cooks pretty much any way any other root vegetable cooks. Think of a large potato that, according to some (my daughter), tastes like a mashup between broccoli and corn. We’ve made mashed rutabagas and also eaten them raw on salad. Both ways were delicious.

One thing is for sure, rutabagas are buggers to cut. A few days ago I tried cutting a rutabaga into thin slices and frying it in a pan, and cutting into it raw was pretty difficult. One way that I figured out to make cutting it is easier is to use two knives, one that keeps pressure on the root and the other that acts as a wedge to split it apart. Just like splitting cordwood, except a little bit tastier.

Others say its best to cook the rutabaga first and then peel off the skins [footnote] https://books.google.com/books?id=r_pxBAAAQBAJ&pg=PA75&dq=rutabaga&hl=en&sa=X&ved=0ahUKEwjc58HGlPTYAhVq_4MKHaooC1k4FBDoAQhPMAY#v=onepage&q=rutabaga&f=false [/footnote]. Perhaps cooking it first makes it easier to skin them?

People from Finland make a dessert rutabaga dish for Christmas called Lantulaatikko. The dish calls for molasses, ginger, cinammon, and nutmeg among other things. [footnote] https://en.wikipedia.org/wiki/Lanttulaatikko [/footnote]. We’ll be sure to try that one for the holidays.

Rutabagas store well packed in moist sand or sawdust or even in a fridge stored in a punctured bag. They’ll usually keep several months. If you want to keep them longer, drying them is another option. You want to cook the rutabaga first until you can poke it with a skewer, then transfer it to ice water, peel off the skin, quarter it and put it into a dehydrator for at least twelve hours. You can also dry them in mashed form. We’ll have to try that this year.

You can also pickle rutabaga and ferment it.

Many plants hyperaccumulate certain minerals in the soil. Rutabaga hyperaccumulates selenium. According to one study in a selenium deprived region of china, researchers were able to feed the soil with selenium and the rutabaga up-took it readily. They concluded that rutabaga could be used as a biofortification plant, meaning a plant-vitamin of sorts, that could provide people in selenium deprived areas with the amount of selenium they needed in their diet.

One study found that rutabaga sprouts have a significantly higher amount of antioxidants than seeds or roots [footnote] https://www.medscape.com/medline/abstract/23957358[/footnote].

There was a time, whenever I ate rutabaga, that it would give me a fair amount of painful gas. I also had some gut problems at the time, so I made a decision for a long time not to eat the root, because of the bloating. Since then I’ve been able to reintroduce it with no problems. Rutabaga contains a sugar called raffinose which is also found in beans. This sugar can cause abdominal bloating in sensitive individuals. But it also increases beneficial bacteria. It’s also high in fiber which helps with gut health. [footnote] https://www.healthbenefitstimes.com/rutabaga/ [/footnote]Why I don’t react to the Rutabaga the same way I have in the past, remains a mystery to me.

Some people use rutabaga and other big roots to break up clay soils.

Rutabagas also make an excellent forage crop. They even feed it to the (bibbed?) pigs.

Rutabaga and a Diverse Diet (Rutabaga, a potato alternative)

Potatoes are one of those things that most people can’t go without. It’s a great starchy vegetable, that you can cook in a lot of different ways. But there are some problems with potatoes as a staple. Some have raised concern over the high amount of lectins in potatoes and other plants in the Solanaceae family. Potatoes can also spike insulin, because of their high sugar content.

For those insulin sensitive among us and those who want to do without lectins in their diet, rutabaga is a great alternative to potatoes. You can mash rutabagas, you can fry them and even make them into chips. Though IMHO, potatoes work much better for many of these uses.

So for you who have yet to try them, we’re hoping to make a post on our very own pasty recipe. Just in time for deer camp, or something like that. Look for it soon.

Let us know in the comments below how you like to eat your rutabagas. Also, if you like roots, you got to check out these other posts too.